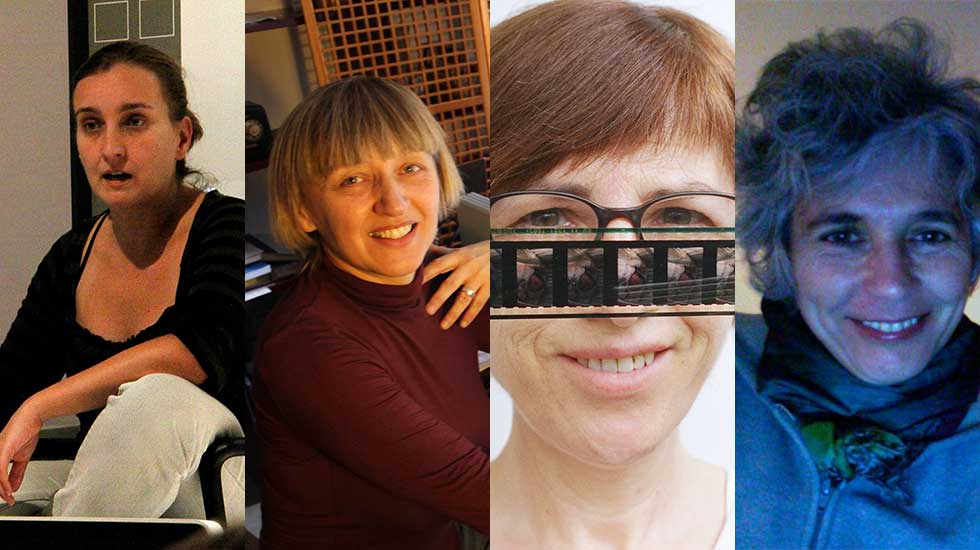 She cuts. Quite, but what exactly is it she cuts? The mustard? Her teeth? Films? Power? And what if, instead of cutting, she’s actually sewing? Perhaps she and others are in fact stitching up our wounds and making life more bearable. Four such women—Núria Esquerra, Teresa Font, Julia Juániz and Nelly Quettier—will talk about the evolution of their craft over the past century. From splicing to creating, from movie mogul’s dogsbody to director’s confidant. The roundtable is organised in collaboration with the Filmoteca de Catalunya and will be held in the Sala Laya at the Filmoteca; admission is free.

En la ciudad de Sylvia (J.L. Guerín) is being screened on 14 November in the CCCB Auditorium.

Beau Travail (Claire Denis) is being screened on 15 November at the Filmoteca de Catalunya.

Teresa Font
Teresa Font studied at the University of Barcelona and make her foray into film in 1976, working as an assistant editor. She soon cut Jesús Garay’s feature Nemo (1979) and Joaquim Jordà’s documentary Numax presenta... (1980). In 1982 she edited Vicente Aranda’s Asesinato en el Comité Central and has cut all of his subsequent films, including Tiempo de silencio, Amantes and Juana la Loca, among others. She also works regularly with Imanol Uribe and Álex de la Iglesia, for whom she cut El día de la bestia, Muertos de risa and Perdita durango. She recently edited Terry Gilliam’s The Man Who Killed Don Quixote.

Julia Juániz
Julia Juániz is a video artist who dropped out of medical school at the University of Zaragoza to make and edit films. Since 1990 she has cut more than 60 films for directors such as Basilio Martín Patino, Víctor Erice, Carlos Saura and Daniel Calparsoro, among others. She has written and directed several shorts and also teaches film editing and screenplay analysis. She has been nominated twice for a Goya Award and in 2004 she won the Premio del Círculo de Críticos Cinematográficos de España for editing Mercedes Álvarez’s El cielo gira. In 2017 she was awarded the Zinemira Prize for her career and contribution to Basque filmmaking.

Nelly Quettier
Nelly Quettier began her extensive career in the 1970s, when she learned the trade of film editor making documentaries for French television. In 1986 she edited Leos Carax’s debut, Mauvais sang, and has cut all his subsequent films. Since 1994 she has also been Claire Denis’s editor of choice (J’ai pas sommeil, Beau Travail and Vendredi soir, among others). In recent years she has worked with a number of leading European filmmakers, including Barbet Schroeder, Ursula Meier and Marc Recha, editing both fiction and nonfiction films. Her latest project, Alice Rohrwacher’s Lazzaro felice, premiered at Cannes this year. She won the Prix du cinéma européen du meilleur montage for cutting Leos Carax’s Les Amants du Pont-Neuf and was nominated for a César Award for editing his later film Holy Motors.